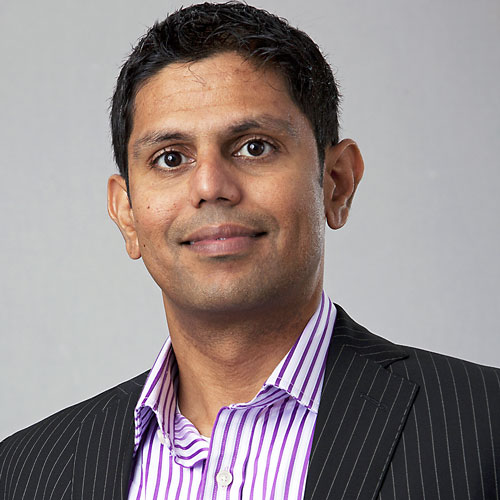 Global CEO & NYU Professor passionate about lifelong learning, transformative leadership and societal impact Karthik believes in the transformative power of education and is passionate about enabling lifelong learning. As the Global CEO of Britannica Group (Britannica, Merriam-Webster, Britannica Knowledge Systems, and Melingo), he is focused on elevating trustable information in the digital universe and transforming learning both inside and outside the classroom. He is also an Adjunct Professor (since 2012) at New York University Stern School of Business, where he teaches students about the media industry and how disruptive forces (digitization, consumer-generated content) are reshaping the industry (new business models, M&A). He is on the board (since 2009) of Urban Upbound, a nonprofit focused on transforming the lives of people in public housing in New York City through job training, financial fitness, and college access.

He has been invited to World Economic Forum Expert Network and is recognized as an expert on Future of Information and Entertainment, Education and Skills, and Future of Health and Healthcare.  He is also recognized as a Top 100 global influencer in Education Technology.

Prior to joining Britannica, Karthik spent over a decade at RELX (formerly known as Reed Elsevier; a FTSE 100 company) in various business leadership roles, driving business and cultural transformations and accelerating growth. In his last role, as Senior Vice President and General Manager for the Global Clinical Reference business, he launched products that won coveted industry recognition, including Best in KLAS and Frost & Sullivan Technology Innovation awards.

He was involved with the William J. Clinton Foundation and was recognized by former President Clinton for his leadership in launching the Urban Enterprise Initiative. He has been involved in a number of transformative initiatives including Doubling India’s agricultural production, Transforming Harlem (New York City) into a vibrant business community and tourist destination, and Establishing New York University (Stern Business School) as the pioneer and top destination for Entertainment, Media and Technology specialization.

Karthik has an MBA from New York University Stern School of Business. He received the distinction Stern Scholar and was inducted into the Beta Gamma Sigma honor society. He has a bachelor’s degree in engineering from Coimbatore Institute of Technology and won the Student of the Year and Best Outgoing Student awards. He also earned a certificate in Design Thinking (Human Centered Design) from Stanford University. He is a National Association of Corporate Directors (NACD) governance fellow.

He strives to live up to a guiding mantra – “Every job is a self-portrait of the person who does it. Autograph your work with excellence.”